The program presented on this page has been deprecated as it has been superseded by an online web application which is more convenient to use and has several extra features. The EMANIM web app has the following new features compared to EMANIM Classic:

This page is only maintained for historical purposes. Please head over to

for the new EMANIM web application! 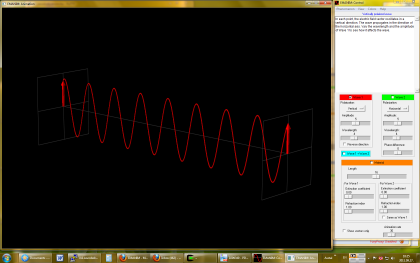 EMANIM Classic is an application for visualizing electromagnetic waves. Its main features are: 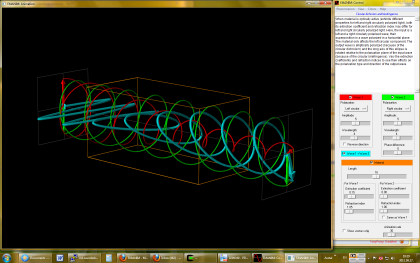 EMANIM Classic can help the user understand a wide range of phenomena related to electromagnetic waves, from the simplest such as a single wave in vacuum to the most complex such as circular dichroism. Its features that promote learning are:

NEW VERSION: Version 1.2 has been released on September 23, 2011. It has a new feature: the direction of Wave 1 can be reversed, and a new phenomenon, standing wave, has been added. It also has some interface changes (the size of the explanatory text field is now intelligently adapted to the screen size, and help texts are also shown in it). In addition, a new Windows binary is provided that should run on all Windows 7 installations. On Windows, please uninstall the previous version (if any) before installing this one.

The source code file named emanim12_python2or3.py works with both Python 2.x and 3.x; many thanks to Michael Burns-Kaurin for creating this version.